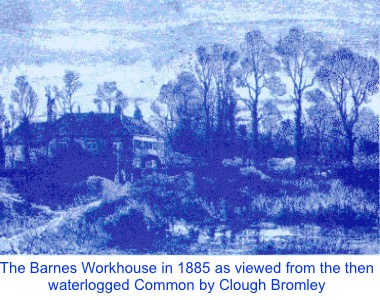 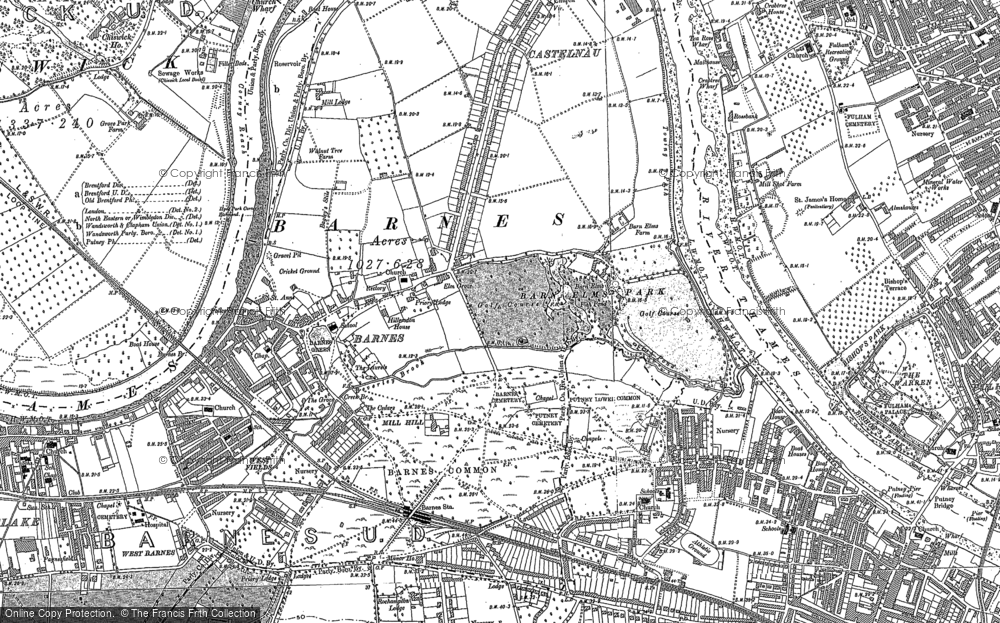 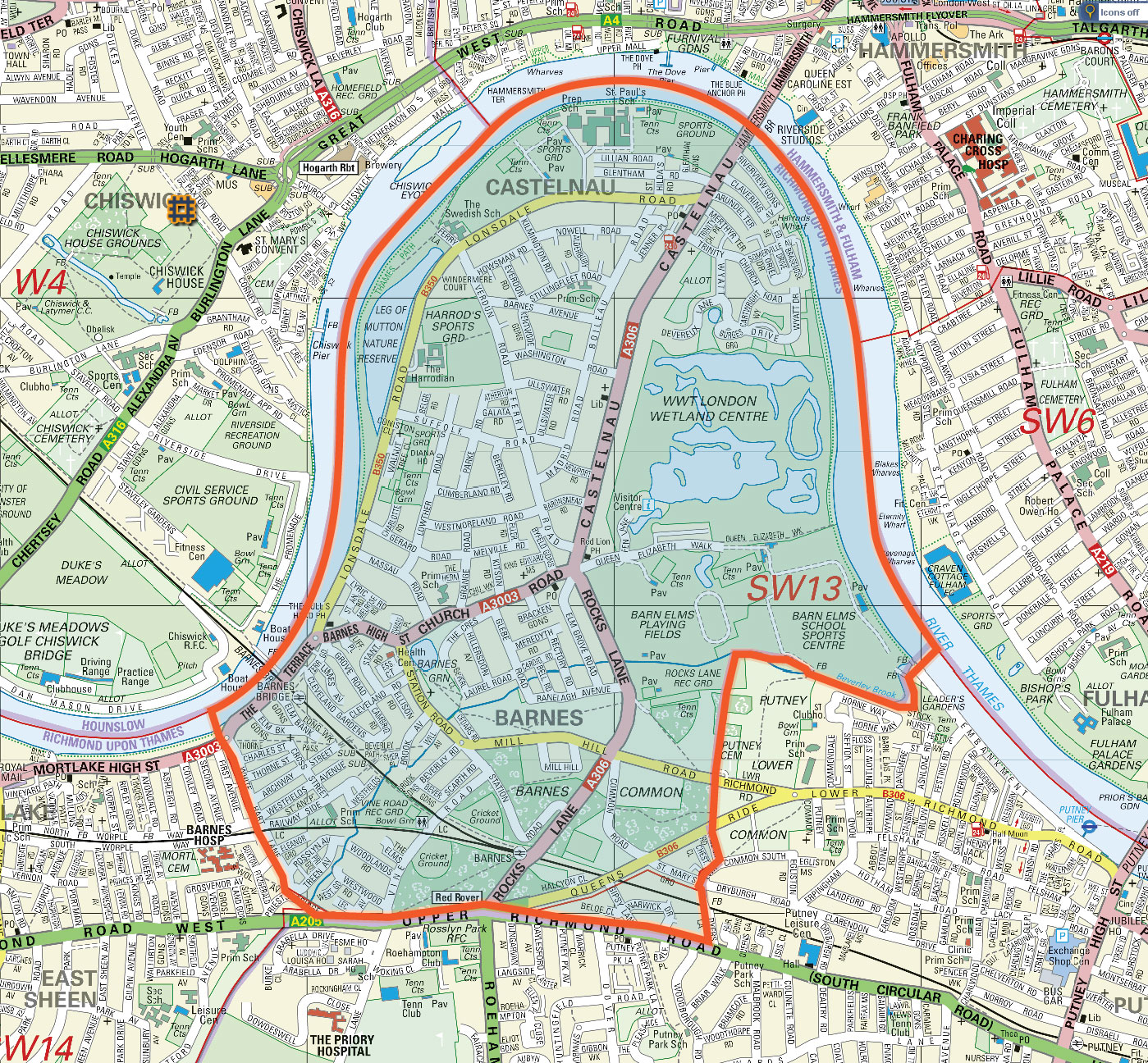 The current boundary of the Parish of Barnes, which provided a “more airy situation” than the original parish confines.

1740s cottages bequeathed to Barnes Parish
By the early 1740s the parish of Barnes had, through bequest, acquired several cottages which were used under the terms of the 1601 Poor Relief Act to accommodate people in “great want”.

1758: workhouse established by Vestry
In 1758 the Vestry resolved to convert these cottages into a small workhouse. By the mid-1770s it was clear that these premises were too small to accommodate the number of people needing parish support and the Vestry began to look for a new site, providing a “more airy situation” and on a “more extensive plan”.

1770s: 23-acre site bequeathed to build workhouse
The Vestry found this new site on Barnes Common: 23 acres, bounded by Queen’s Ride; Upper Richmond Road and Dyers Lane  (the parish boundary with Putney). They petitioned the Lords of the Manor for the use of the land and were granted this use within the month.

1778: workhouse opens at Queens Ride and Gipsy Lane
The Vestry appointed a local builder, Joseph Yellowby, to erect a workhouse on the north side of Upper Richmond Road in the four-acre triangle formed now by Queens Ride and Gipsy Lane, Sir Richard Hoare, head of the merchant bank and tenant of the manor of Barn Elms, successfully raised the necessary capital through the sale of interest-bearing annuities. Construction went ahead and the new premises opened in December 1778.

1785: workhouse boundary extended
It was originally hoped that the workhouse would cover its costs through the sale of goods produced by its residents. This was not to be. To put the workhouse on a sounder financial footing, Sir Richard and the Vestry arranged in 1785 to extend the site eastwards to the Barnes/Putney boundary by incorporating the 16 additional acres of common land between Queens Ride and Upper Richmond Road.

1834: Responsibility passes to local authority
By renting this land out for market gardening it was expected to raise sufficient income to support the workhouse. This also proved over-optimistic. However, the workhouse continued to operate on its enlarged site for another 50 years (usually with around 30 residents) until it was rendered redundant by the Poor Law of 1834 which shifted responsibility for the operation of workhouses from the local parish to a specially appointed local authority. After 1836, the rest of the site continued to be let for market gardening although the central section was soon sold to allow for construction of the Richmond Railway.

1860s: “Workhouse Charities” established
By the early 1860s, with the railway hampering the operation of the market gardens, the time had come for residential development on both sides of the railway track. The Vestry decided to develop the site for superior housing and set up the “Workhouse Charities”, with three trustees, to supervise development. A mortgage of £1,695 was raised to initiate the work. Surveyors were appointed and the entire area on both sides of the railway was divided into sizeable plots each with a substantial private dwelling, many of which stand to this day.

1886: Charity purpose set in stone
The new properties were leased, producing an income of £1,127 per year. The purpose of this income had not changed: it was to be used for the benefit of the local poor and this purpose was set in stone in 1886, under the new terms of the “Workhouse Charity” scheme, with the charity being run this time by ten Trustees. The scheme provided that the yearly income was to be paid to the “Overseers of the Poor of the Parish for the time being” and from there, the funds were applied in aid of the poor rates of the Parish.

1930: responsibility moves to local borough
During the 43 years after 1886, the trust income was distributed to the local overseers of the poor (usually the church wardens). In 1930 new legislation finally transferred all responsibility for “relief of the poor” to local boroughs and from then the Charity’s income was simply transferred to the borough of Barnes and treated in effect as a welcome reduction in the local rates.

1970: “Barnes Workhouse Fund” Charitable Scheme adopted.
However, the Trust was advised that this arrangement was of dubious legality. In January 1970, the present charitable scheme was adopted under the title “Barnes Workhouse Fund”, with the specific condition that “the funds or income of the charity shall not be applied in relief of rates, taxes or other public funds”.
The Barnes Workhouse Fund is provided with nine Trustees, all required to be Barnes residents. The Fund’s objects confirm that the charity should act for the benefit of the poor, aged and needy, who reside in the Ancient Parish of Barnes (broadly the SW13 post code area). In addition the Fund may support recreational or educational activities and may also contribute to capital projects in Barnes.

1974: Walsingham Lodge Almshouses built at Ferry Road
In 1974, the Board of Trustees spotted an opportunity to extend the Barnes Workhouse Fund’s range of support, by building sheltered accommodation for older people in Barnes on one half of what was the site of the tennis club in Ferry Road. The Walsingham Lodge Trust was created as a linked charity (with the same trustees) and now provides one and two bedroomed accommodation in the form of bungalows and flats, at a low rent, for retired residents of Barnes.

The freeholds of most of the houses on the original workhouse land have been sold over the years, with the proceeds invested. These investments produce income for the charity, to be spent for the benefit of Barnes residents in need.

1990: Viera Gray House lease created
On the other half of the same Ferry Road site, the Barnes Workhouse Fund made provision for the community in 1990, by leasing land to build a residential care home for the frail elderly. The first leaseholder was Richmond Churches Housing Trust, who built the home called Viera Gray House.

2001: Leasehold properties built
In 2001, five leasehold bungalows were also built and sold in Berkeley Road. Residents of these (who must be at least 60 years old) have the use of the communial services and facilities at Walsingham Lodge.

2017: Corporate Trustee established
In 2017 the oversight body of Barnes Workhouse Fund and Walsingham Lodge Trust was incorporated. The Barnes Workhouse Fund Trustee Ltd, a company limited by guarantee, was established as a Corporate Trustee for the two linked charities. A Board of nine Directors of the company replaced the nine trustees of the charities.

2020: Charity renamed as The Barnes Fund
2020 marked the 50th anniversary of the adoption of the Barnes Workhouse Fund charity title. It was also the year in which the trustees resolved to change the name of the Fund to “The Barnes Fund”. The new name is an evolution. Its aim is to make the charity fit to support the people and community of Barnes in the future in a manner that is contemporary, approachable and respectful, while being fully mindful of the charity’s (and its predecessor’s) long history. While the term and institution of the ‘Workhouse’ played a crucial part in the charity’s history, it is considered less appropriate to today’s world

The Future
It is the Trustees’ responsibility to lead the Fund into the future in a way that ensures that it continues to support those residents of Barnes who are less fortunate than others, for a long time to come and in the best ways that we can. The Fund’s purpose is as strong today as was that of the original Barnes workhouse, some two hundred and fifty years ago.

Based on an original report by: John Seekings

With thanks to the Barnes & Mortlake History Society and their publication, “The Barnes Poor House” by Margaret Butler.

And especial thanks to Miranda Ibbetson, our Director from 2003 to 2018, who collated this excellent historical summary